My last week in Virginia was crazy, to say the least.

I had quite a few appointments to squeeze in, my parents were coming into town, I had a surgery scheduled, I was finishing up my last few days of work, there were a lot of people I needed to say “see you later” to, and I had to pack up and move my things.

Oh, and apparently I’ll be going into menopause.

Yeah, you read that right. Menopause at 25.

If you read my last blog post, “My egg-cellent news” you know that I took the precaution of having some eggs harvested because chemo could make me infertile. This week I learned that there’s another precautionary measure I could take to increase my chances of having children one day. I would need an injection of something called Lupron which would shut down my ovaries and essentially send me into a temporary, 3 month long menopause. If all goes well, I may not even need those harvested eggs and could potentially conceive naturally some day.

It’s not guaranteed, but I figured it was worth a shot- pun intended. Hot flashes, here I come!

I also needed to get my mediport implanted this week. I want to say that I absolutely love hearing from so many different people. I appreciate everyone who takes the time to tell me about their experiences with cancer and all the advice people give me. Every now and then, I get emails that kind of freak me out though. I heard about how the mediport would look sticking out of my chest. How much it hurt some people and how uncomfortable it was, even after the site was completely healed. I had a woman who told me she couldn’t stand to look at her husband’s port because it grossed her out so badly. One of my friends told me she got a collapsed lung from her surgery. I did NOT want to do this! That’s a silly thing to say though because really, does anyone? I came to terms with it and was just ready to get it over with.

The surgery went well and I’m starting to heal. I have to agree with that woman though- it’s not pretty.

It’s also a little painful right now. They put it on the right side of my chest so I’m not allowed to lift my right arm. At first, that didn’t seem too bad to me. My mind was quickly changed after the first day though. Next time you take a shower, try washing your hair with only one hand and make sure it’s your non-dominant hand. Then try to get dressed without lifting your right arm. I’ve been a big fan of button-up shirts lately because it takes away some of the hassle. Don’t even get me started on drying my hair or trying to put it in a ponytail. Both are impossible tasks with only one arm!

Did I mention I needed to pack and move this week too? Thank goodness my parents were in town. They did almost all of the packing and moving for me because I’m not able to lift more than 10 pounds with my port. All of my stuff is patiently waiting for me in a 10×10 storage unit for when I make my return to Virginia.

I had a few other appointments to get done including a pulmonary function test (pictured below) and a heart function test. Both were simple, but it seemed like my to-do list was never ending! 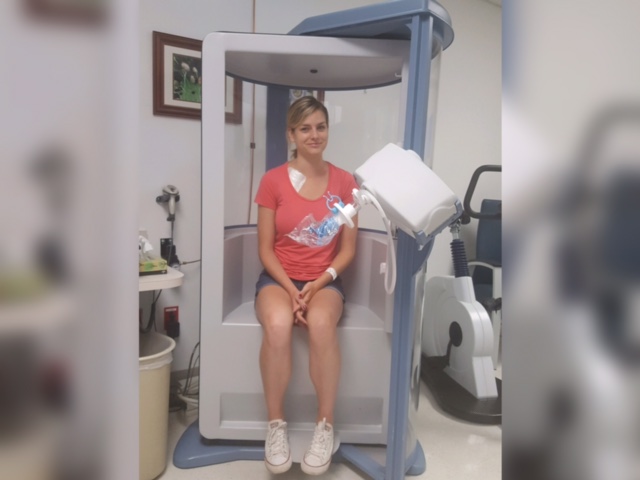 My parents and I safely made it to New York on Saturday evening and everything is going well so far. I’m enjoying some family time and Chloe is loving her new home. She already made a new puppy friend, my sister’s dog, and has a huge backyard to run around in.

My next steps are meeting with my new oncologist at Memorial Sloan Kettering Cancer Center and then finally starting chemo. The faster I start chemo, the faster this chapter of my life will be in the past. I’ll keep you all updated with how my first treatment goes!

71 thoughts on “Mediport, moving, and… menopause?!”

Happy 9th birthday to my sassy and spunky girl. Love you, Chloe!!!
Guess where I am!!! I had no idea how much I missed the 757 until coming back 😭 Until next time, Hampton Roads ❤️
Oh how I have missed Hampton Roads and my running friends and @jandaracing 😭
Hey @crushwade, remember this time last year when we planned a wedding in 5 days? Happy first anniversary, love ❤️
Have to brag on this guy for a minute. He’s been at his new squadron for 6 months and ended up winning FGO of the year! Also took home the 4th quarter award. Proud wife moment! @crushwade 😘
Creepy little ghost town right outside of Vegas! 👻