A cancer diagnosis comes with a LOT of things to worry about. Will I be ok? How will it affect me? What about my job? Oh, and “Who will ever want to date me after this?”

As I type that out, I realize how silly it probably sounds, but it was something that I actually struggled with quite a bit at first. It’s tough. Cancer has a way of playing some serious mind games and this was a hard one to get past.

I spent the first couple months of chemo feeling so insecure. Without hair, I hardly recognized myself when I looked in the mirror. I remember being surprised almost every time I saw my reflection. It was a strange feeling.

I eventually started to get used to that just in time for my eyebrows and eyelashes to fall out. I know there are so many nice people out there who will say a variation of, “I’m sure you look fine without eyebrows!” I know this because you all are amazing and always try to make me feel better no matter what. However, NOBODY looks good without eyebrows! Don’t believe me? Let’s ask Google: 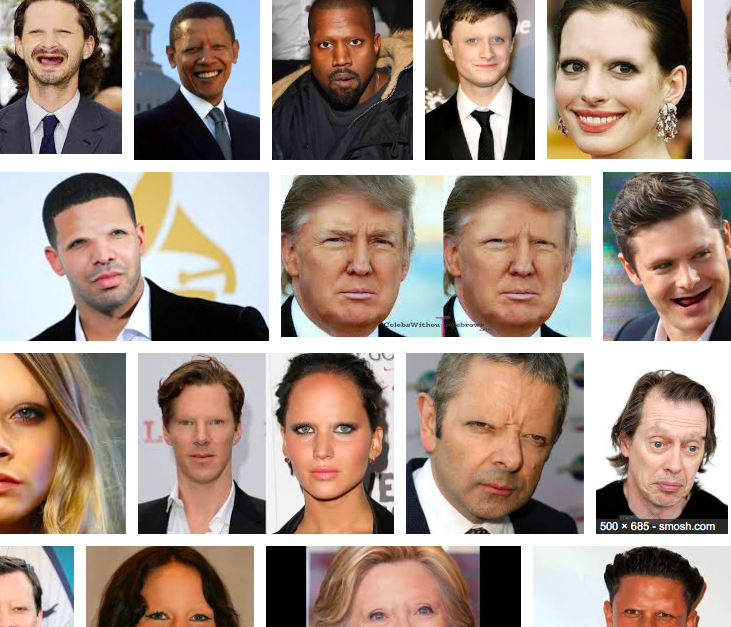 Hopefully you got a good laugh out of that like I did! THANK YOU to whoever invented eyebrow pencils lol! I quickly learned how to draw my eyebrows on and apply false lashes to make myself look like a human again.

Hair loss wasn’t the only physical change that cancer brought on. I’ve lost a lot of muscle that I worked really hard to gain over the past few years. Even months before my official diagnosis, I rarely had the energy to get myself to the gym. I actually really enjoy working out and used to go to the gym about 4-5 times a week so it was tough when my doc said I needed to stay away from gyms during treatment. I’ve tried to stay active in other ways , but most days I’m ecstatic just to finish a 20 minute walk without needing to take a break. I’ve accepted it now and am looking forward to getting back in shape once this is over, but early on in this journey it was just one more thing to add to my dwindling self confidence.

I also want to point out that, hypothetically speaking, if I was married or at least in a serious relationship, I would hopefully be able to depend on my partner to help  me through my treatment. In that situation, I wouldn’t have had to uproot my life and move back in with my parents. I probably would’ve been able to work on the days that I didn’t feel too bad and my life would’ve somewhat carried on.

With all that said, I’m actually really happy to be single now that I’ve come to terms with it all and I wouldn’t change a thing about it. Why?  Because chemo is the hardest thing I’ve ever had to go through and I did it as a single woman. I now know that I can deal with anything life throws my way… BY MYSELF! (Well, not including the support of my family and friends and thousands of amazing people who I’ve never even met… but besides that, by myself lol). Same goes for anyone reading this who may be in a similar situation. It’s a good feeling, especially when I lacked this confidence not too long ago. Let me elaborate, but just a warning: this is going to get a little personal…

Earlier this year I was in the worst relationship I have ever been in. This guy treated me so poorly and I put up with it because he made me feel like I was nothing. I knew it was bad when my coworkers were able to see that something was seriously wrong after only knowing me for a few months. I never told anyone too many details of what the relationship was like and instead, I was always defending him to my new friends. Even still, I had more than one coworker tell me that he seemed very controlling and probably even a little emotionally abusive toward me. He ended up breaking up with me on the day of my first doctor’s appointment when I was already an emotional wreck. Since then, I’ve had a lot of time to focus on myself and rebuild my self esteem. The only thing I regret is that it took cancer to make me realize I never should’ve put up with that. For the record, I have also dated some really great guys. Actually, almost all of my ex-boyfriends reached out to me after learning about my diagnosis to wish me well and send words of encouragement. Dating is so low on my priority list right now, but when I decide I’m ready, I’ve set the bar pretty high for my future boyfriend.

I also have to say that guys don’t seem to mind my diagnosis at all. There I was thinking I’m damaged goods while nobody else cares. I took a poll with some of my male friends and asked if they would choose not to date someone because of a previous cancer diagnosis. The results were unanimous- none of them said it would be a deal breaker. By the way, I’m sure there are some men out there who do care, but guess what? I’m really not looking to be with that kind of person anyway so it’s all good!

Also, I had the chance to meet Jake Owen at a concert (my celebrity crush!) and he said I was beautiful! I’m going to brag about this forever so I apologize in advance, but if JAKE OWEN can call me beautiful at a time like this, then all is right in the world 🙂

27 thoughts on “Dealing with cancer as a single woman”

Happy 9th birthday to my sassy and spunky girl. Love you, Chloe!!!
Guess where I am!!! I had no idea how much I missed the 757 until coming back 😭 Until next time, Hampton Roads ❤️
Oh how I have missed Hampton Roads and my running friends and @jandaracing 😭
Hey @crushwade, remember this time last year when we planned a wedding in 5 days? Happy first anniversary, love ❤️
Have to brag on this guy for a minute. He’s been at his new squadron for 6 months and ended up winning FGO of the year! Also took home the 4th quarter award. Proud wife moment! @crushwade 😘
Creepy little ghost town right outside of Vegas! 👻